The Brewery at the CIA

The Brewery at the CIA

The Brewery at the CIA is primarily a classroom where bachelor’s-level students learn about the ingredients, equipment, and techniques required to produce ales and lagers. It was created in 2015 in partnership with Brooklyn Brewery, whose brewers and business executives often serve as guest lecturers. The class helps future food professionals think differently about beer, elevating its status as a fine beverage on a level with wine.

The Brewery at the CIA Wins Silver and Bronze Medals >

Order Beer Online from The Brewery at the CIA >

Our most popular beers, available year round.

We’re always brewing something new. Check back periodically to see what’s available. (Current as of 11/16) Hutch Kugeman is head brewer for The Brewery at the CIA. Hutch is responsible for producing four kinds of beer in the microbrewery for the CIA’s public restaurants and student dining facility. He also assists in teaching, as The Brewery at the CIA is a classroom where students learn about the ingredients, equipment, and techniques required to produce ales and lagers in a course titled The Art and Science of Brewing.

A native of Redding, CT, Hutch Kugeman is a graduate of the University of Virginia. He also holds a diploma in Brewing Science and Engineering from the American Brewers Guild. From 1997 to 1999, he was a middle school teacher in North Carolina as part of the Teach for America program.

A Brewery Tour and Tasting 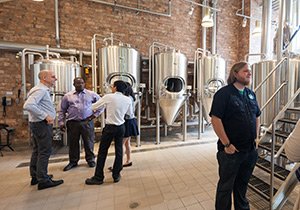 Join us on a student-guided walking tour of the CIA campus at 4 p.m. followed by a tour of The Brewery at the CIA and tasting led by our Head Brewer Hutch Kugeman. $21 per person*.

No dates scheduled at this time. Check back later.

*Must be 21 years of age or older to participate.

Did you know that we grow hops right here on campu

It's science! Students in our Art & Science of Bre

It's not too late to join us this weekend for the

Looking for something fun to do this Labor Day Wee

We had a chance to harvest some wheat grown on the

We consider ourselves lucky to be here in the Huds

Science! Students in the Art & Science of Brewing

Beefsteak Blonde is back! We normally brew this hi